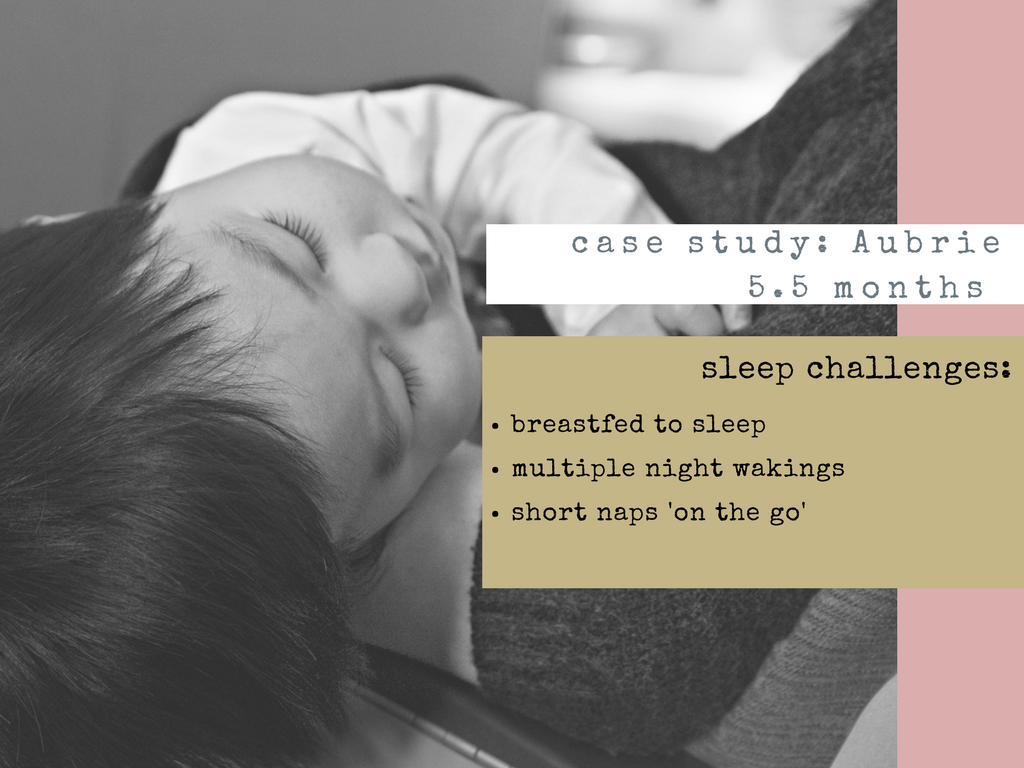 Who: Aubrie was healthy and alert 5.5 months and was the baby sister to 3-year-old Amber.

Sleep Challenge: Like most newborn’s Aubrie had slept reasonably really well and had even managed some nice long stretches around week 14. Being a younger sibling meant that Aubrie was frequently getting ill and catching colds from her Big Sis. These episodes would always set her back and her sleep started to deteriorate both day and night.

Her naps were very short at somewhere between 20 – 45 minutes and generally on the go in the buggy or car. Aubrie usually woke up crying or feeling grumpy, all of which are signs of a baby that is really overtired.

How much or little Aubrie slept at nighttime was an absolute lottery but every night there were several wake ups. Sometimes she could be settled with a quick 5 minute feed but often it turned into a 90 minute battle trying to get her to fall back to sleep and stay in her cot.

Mum was exhausted and frustrated as by the time I came on board to help Aubrie was waking every 45 minutes through the night and was in Mum’s bed as this was the only way that she would now settle. This ‘reactive’ co-sleeping arrangement wasn’t something that worked for this family in the long term.

An extra frustration for this family (along with so many others), was that Amber their first child had always been a fantastic sleeper managing the elusive sleep through night at just 13 weeks old. Having a child with such a different ‘sleep personality” had meant they had fallen into habits that they knew they shouldn’t but just didn’t know where to start to get out of them.

Results: Having two small children of my own I know how difficult it can be to juggle the needs of them both and feeling like one is always missing out or not getting any attention.

When putting the Sleep Plan together I made sure that Aubrie’s sleep needs were carefully balanced with her sister’s daycare and weekly activity commitments such as swimming lessons. Mum then had a clear plan of when and where Aubrie would be sleeping during the day and the flexibility of not being chained to the house for naps with a 3 year old climbing the walls!

I had the pleasure of meeting gorgeous Aubrie in person and spending the first night of sleep training with Mum to coach and support her through it.

The first night went really well and Aubrie fell asleep at bedtime in just 20 minutes. There was one night waking where Mum helped settle her back to sleep and the second waking was for a feed. Aubrie settled back to sleep nicely after that and slept through until 6:50am when she woke with a big beaming smile. She wasn’t ravenous and was happy to wait for Mum to make herself a well-deserved cup of tea before breastfeeding.

This brilliant start was just the confidence boost that Mum needed and she went from strength to strength and Aubrie was completely settling herself at naptime and bedtime after just a few days.

The in the following weeks Aubrie dropped her night feed. Members of the family have commented on how happier Aubrie seems since she has been sleeping better and Mum has also managed to get her to accept bottle feeding something that she had previously refused.

Testimonial: "Aubrie had never been a good sleeper. My first daughter slept through from 13 weeks old so I kept waiting for that corner to be turned, but it never happened, in fact, things got worse and very rapidly declined into me doing anything I could to get some sleep. At 5 months, she was in my bed all night long, feeding every 45 minutes and barely napping during the day unless we were out in the car or buggy.
I struggle to survive on 8 hours sleep at the best of times and it was having a huge impact on my mental wellbeing and relationship with my husband, who was sleeping in a different room.
Sofie came in with a strong and sensible plan. She was confident in her abilities and empathetic and just what I needed to help me reach what I knew Aubrie could achieve. My family thought I was crazy going to such lengths but I knew it was needed for a significant change to happen.
I was dreading the first night, but with Sofie there it was fine! Aubrie took to the new plan so easily and within a few days was settling herself day and night in her own cot, in her own room. Two weeks on, she slept 7-6 with a quick feed once in the night and 3 good naps during the day in her cot. Four weeks on she sleeps 7-6 with no feed and rarely cries in the night. The sense of routine and knowledge that I can put Aubrie to bed and she will sleep has made me so much happier and less anxious. Family have commented on how much better Aubrie looks and how much more contented she is in herself. Their scepticism and doubts where proved wrong.
I will be recommending Sofie to anyone and everyone; definitely money well spent!"

If Aubrie has inspired you and you want your baby to follow in her footsteps then click the 'book now' button and schedule your no obligation Sleep Evaluation call now. You won't regret it! 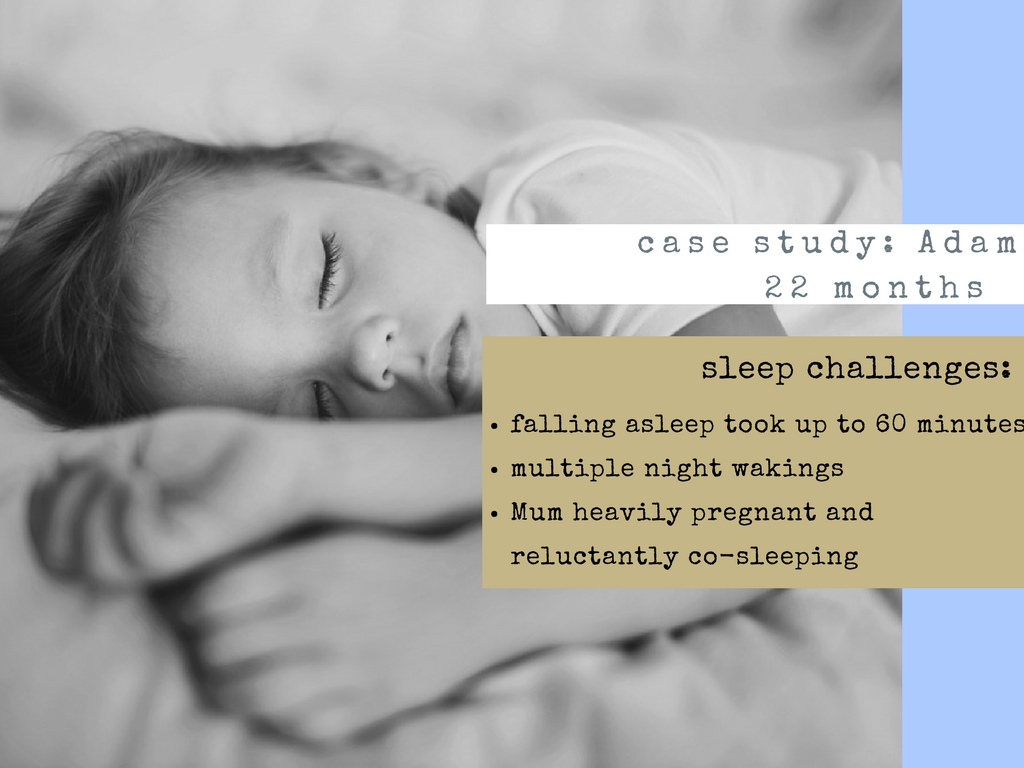 Who: Adam 22 months was a very energetic and happy toddler and big brother to 5-month-old Elias. He had a very late bedtime.

Despite his uncommon sleep schedule, Adam was always on the go. At the earliest bedtime would be 10pm and on occasions it was as late as 12:00am.

Sleep Challenges: Again taking up to an hour or even longer to fall asleep and needing Mum to sit with him until he eventually dropped off.

Then the real fun began as Adam would wake an hour or so later crying and need Mum to come back and help him get back off to sleep. This pattern was repeated all the way through the night leaving his heavily pregnant Mummy absolutely exhausted.

This proved just too draining for Mum. To get just some sleep herself she had started to take Adam into her bed when he woke up. He slept better when he was in with his Mum and Dad but was still waking 1 or 2 times each and every night…pretty tough on a pregnant Mummy.

On the positive side Adam was still napping but again taking up to 1 hour to fall asleep for his nap. Mum having to sit with him and wait whilst he falls asleep. Or lie down and cuddle.

2-3 waking’s and crying during the nap. Mum having to return to get him back to sleep.

The additional challenge for this family was that Mum’s support network was limited. Her husband worked very late and didn’t get home until around Midnight and to spend some time with him meant that bedtime for her was 2am.

Results: Like many parents, juggling the needs of two children whilst sleep training was one of Mum’s main concerns. The plan for Adam took his younger brother into account and crucially we created a strategy that Mum felt she could follow.

You couldn’t question her commitment to the plan as she planned to stay awake the entire first night to make sure that she could remain consistent! The sacrifices we make for our kids 🙂

Fortunately, the all-nighter wasn’t necessary as Adam slept for a straight 7 hours, something that he had never achieved in his life!

The first week was hard going, which was to be expected from a lively, almost 2 year old who had never been a great sleeper but in less than 7 days Adam was sleeping through the night in his own bed and bedtime was now a reasonable 8.00pm.

He also began napping in his own bed rather than a day bed downstairs, giving Mum a chance to take a well earned break during the day.

A lovely ‘side effect’ of Adam sleeping through the night was how much calmer he became. Tired kids are usually wired kids with very short attention spans. We introduced stories into his bedtime routine and Adam fell in love with reading, something that he’d never sat still long enough to enjoy before.

Testimonial: "Sofie is a miracle worker. I honestly thought there was something medically wrong with Adam (22months)
He was worse then a new born. After spending at least 45 mins patting him to sleep with him trying to escape he would always wake after an hour crying and would take forever to settle. Then he would wake up consistly throughout the night, 30mins minimum max after 2 hours. It got so bad with having a 6 months baby to deal with too that he would end up in our bed.

while Adams asleep it had to be deadly silent otherwise he'd wake up, with a 6 month old baby every night was a nightmare

Sofie listened to every tiny detail and took all my worries into account. I didn't actually think it would be possible to sleep train Adam with another baby but she guided me to make it out and it did

I prepared myself for the worst, I planned to stay awake throughout the nights to make it easier then waking up every hour. But to my surprise the first night wasn't as bad as I expected it to be and I managed to sleep for 7 hours straight towards the end of the night and that hasn't happened since the day he was born.

Her techniques got Adam to sleep through the night in his room in 7 days! I never thought he could do it, he became a different person at night. And it made me realise just how tired he was all this time.

Sofie also introduced another amazing thing into Adam life which is reading. Hes always such a busy body that he'd never sit for a second and getting him to listen to a short story was mission impossible. Now he loves books,he comes to me with books and he even sits down to look at the pictures on his own.

Sofie has completely changed all of our lives. Adams well rested, my husband and I enjoy our evenings together. Ive become a better mum now that I'm actually getting some sleep. We're all very happy thanks to Sofie.

Sofie's a very good listener and very supportive, she didn't judge me for anything I did or didn't do. her passion for this is what made me know I was trusting the right person to help Adam sleep. I feel like I owe her sooooo much and cant believe i didn't reach out for help sooner. Every tired parent needs to know about Sofie and her magic because it really does work!"

If Adam's incredible transformation has inspired you and you want the same for your family then click the 'book now' button and schedule your no obligation Sleep Success Strategy call now. You won't regret it!